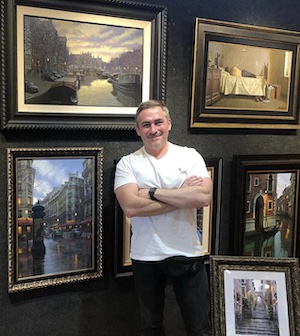 "I pay full attention to the surrounding world.
To life itself - that is the source
of my inspiration. Perhaps my inner romanticism moves me to select fleeting and transcedent moments, such as twilight, dusk, sunset, sunrise, first light, rain showers, evening reflections - transitory, etremely emotional, concentrated events, such as the clean, crisp freshness of a city just washes by the rain. "
Alexei Butirskiy

Meet Alexei Butirskiy the artist
Born in Moscow in 1974, Alexei Butirskiy is a classically trained painter, who received his MFA in 1998 from the Ilya Glazunov Russian Academy of Painting, Sculpture and Architecture, one of the most prestigious art universities in the world.

Since 2000, Butirskiy has participated in over 250 exhibitions, most notably in the Victor Emmanuel II National Monument in the Piazza Venezia, Rome (2007), the Marietta Cobb Museum of Art in Atlanta (2014), several museum in (Casablanca), Morocco and other. Alexei's favorite subjects are urban landscapes depicting the daily life of cities without pathos or embellishment.
The strength and intensity of the play of light and shadow are the main expressive means of Butirskiy's works, which glow from within and demonstrate virtuoso use of chiaroscuro. The sophistication and skill with which Alexei portrays architectural objects in his works, as well as his sense of color and form, cannot leave anyone indifferent.
Thanks to his talent, he rightfully belongs to the elite of contemporary Russian artists. Alexei Butirskiy's works are proudly exhibited in galleries across the United States and Canada, as well as in private collections in France, England, Austria, Germany, Switzerland, Canada, Russia, Morocco, and
the United States.
9 of 9 Items
9 of 9 Items
Alexei Butirskiy Bio

Since the beginning of the new millennium, literally thousands of collectors from around the world have added one or more of Alexei Butirskiy images to their collections.

What has caused this immediate and enthusiastic reception? As Aristotle once said, “Art not only imitates nature, but also completes its deficiencies.”

No one could have described Alexei’s complex painting technique more succinctly!

In his own unique way, Alexei Butirskiy achieves a marvelous transition from what is often unattractive source material through a masterful enhancement process of addition and subtraction, until he awakens the sleeping beauty in each composition.

“When I paint, I don’t just copy from any particular place. I try to memorize the original impression I had when I was somewhere, and then I recompose it in my head, based on how I feel about it. After that, I paint. I think it is very important for an artist to not just copy mechanically from nature. In that case, the artist could be replaced by a camera.

An artist should rather have a goal and then follow it to create the emotional images and a special atmosphere in the painting, and to thereby convey an individual message. Painting nature with all its many faces is always magnificent. To me, there is no such thing as bad weather.”

Alexei Butirskiy brings a genuine expression to the art world and a sense of both mystery and belonging to each of his paintings. “The source of my inspiration is life itself. I find peace and harmony all around me. I observe the beauty of my surroundings and love to share my appreciation of the world through my eyes and transfer it to my viewers by way of my canvas.” Born in Moscow in 1974, Alexei Butirskiy entered Moscow Art College in 1992. In 1996 he finished his studies at the Art College and graduated with an Excellence Diploma. In 1998 he completed the Russian Academy of the Arts where he studied under respected professor L.S. Hasyanova.

Since 2001, Butirskiy has participated in over 100 exhibitions. In 2007, Alexei was invited to exhibit at the prestigious Il Vittoriano in Italy. He has exhibited at one-man shows and auctions in Russia, England and the United States.

Most recently, Alexei has concentrated his efforts primarily on representing urban life around him in unembellished, truthful terms. A sense of tranquility is conveyed in each of his paintings. They are typically without action or conviviality, and most are uncannily still, with only light, space, shadows and color offering dialog.

The power and intensity of the relationship between light and dark are the profound forces of his work. The sophisticated application of light effects with color reinforce the majesty of his compositions. Butirskiy’s paintings are reminiscent of the works of Claude de Lorraine and Caravaggio with their luminescent qualities and skillful variations of light and dark.

Alexei Butirskiy’s ability to combine architecture, color and format is a refined skill normally reserved for artists much his senior. As a result, he ranks among Russia’s top emerging artists. His work is exhibited in galleries and private collections throughout France, England, Austria, Germany, Morocco, Switzerland, Russia, Canada and the United States. From Russia with Love!