Terry Isaac - Wildlife & Nature Artist
Terry Isaac was one of the top Nature & Wildlife artists of his era.
Terry Isaac suddenly passed away in July 2019 at the age of 60.
View Terry Isaac Artwork 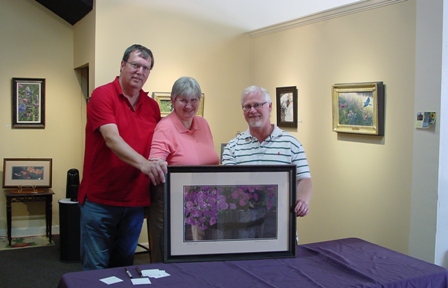 Terry Isaac with his collectors at Ashley's Art Gallery.

Terry Isaac, Internationally acclaimed wildlife artist, grew up in the Willamette Valley of Oregon, and it is there that he began his love affair with wildlife. Drawing inspiration from his own backyard and from the captivating vistas of the Northwest, he began to create dramatic wildlife art.
He now calls Penticton, British Columbia, Canada “home” and, since moving, has continued to create paintings capturing unique characteristics of wildlife and their habitat.

Terry travels around the world to capture exciting images, but his main painting focus continues to be on North American birds and mammals.
Terry  Isaac
Major  Awards / Recognition
2019 Artist of the Year - Ducks Unlimited - Canada